We Are The World
Ending and Beginning

The obligatory press conference. Wednesday, 10:00 a.m., Studio A of A & M. Where the risers stood thirty-six hours ago, shaking under the weight of the chorus, now a platform […]

We Are The World
Woodstock in the Studio

January 28: 8:00 p.m.     After an all-day deluge, the night turns cool and dry. As the crowd spills out of the American Music Awards at the Shrine Auditorium in downtown […]

We Are The World
A Week of No Sleep

January 22 & 23     Security is tight this Tuesday evening outside Kenny Rogers’s Lion Share Studio, 8255 Beverly Boulevard, Los Angeles. Inside, up the stairway and down the green-carpeted, mirrored, […]

We Are The World
Writing the Song

A day after Belafonte’s phone call, Ken Kragen heads out to Lionel Richie’s house. Lionel immediately commits to writing the song, explaining that he and his wife Brenda had been […]

We Are The World
A Call to Action

A few days before Christmas 1984, Harry Belafonte happens to be watching television. The news report is bleak with information about the African famine. So vast and complex is the […]

We Are The World
The Need for Help

One hundred years after colonial powers divvied up Africa to suit their own purposes, the continent finds itself in a state of permanent crisis. Twenty-nine of the world’s thirty-six poorest […] 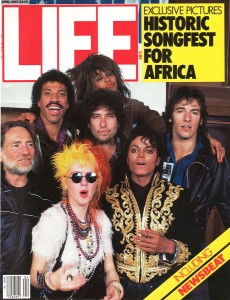