by Jorie Graham
of genius? How one wants to be other than being, how one wants to be a kind of
flagellation—a
genuine hearing—listen—that whisper, that whistling “over there”—are we just in time?,
[we want to be just in time] waiting here—so blank—so open to the brushwork of
the given—
that it spill its strokes onto us—build itself upon us—holy garment—(“a life”)—
Is it all coming nearer? Are we ripening?
Is this, finally, the hoped-for undrowning of the self—a final “yes”—awash in childhood
(whizzing past),
and silence [so intense] and us no wiser for it,
and the new feeling of the thing inside one—
flooded with duration—sort of silvery…
Then it was time to go to the opening.
That was the end of the first day.

And see how the ever-receding last analysis, [a life]—into which being cannot but
enter [yes] [I wanted to paint nothing, how is it
I cannot paint nothing?]—is still the only garden? And us
eternally foreigners?
Perhaps you
can look into the vanishing “point”: perhaps the father was the father, for
instance,
the mother didn’t really know [here the painter pauses, before revealing something
else]: she was in a mixed-class, mismatched relationship, she had taken
another lover by the end of the war, she made him feel special, he was special, she
fostered his sense of social superiority, but he has few warm memories, they died,
it was not really possible for me to go back [he says matter of factly] [then returns
to his dinner]. Stroke of

luck [brushes stacked in drawers, custom-designed, rolling
shelves] [when your work sells for] [millions of dollars] [you] [can]
indulge yourself. You can paint to prove that painting is “dead.” You can
paint as a true believer in painting. [Oh I should] [I really should] [you said
it was there] [truly there] [I only had to take the photograph]
[and that only one thing exists] [no…not death!] [this!] [holds up his birth
date] [on a tiny white card] [This, this—(picks up a photograph)]:
a snowy scene, at the edge of a building, behind some trees, leading to…[that was
the second day]

Look now: he carries it to the edge of his studio: he puts the canvas on an easel
at the end of the room: he slides the photo into the projector:
the photo appears, projected on the canvas—[can you hear them? the poisonous
promises filtering down] [Faust: don’t you bare your greedy teeth at me
like that! It sickens me—Great, magnificent spirit that deigned appear to me,
that knows my heart and soul—feast, feast] [Mephisto: Have you finished?]
(song from within: My mother, the whore,/Who has murdered me—/My father,
the rogue, /Who has eaten me—/Pick up every bone/Pick up every bone]—
him beginning to trace with charcoal, a ruler, tracing each detail of
the photograph, as he always does, [which usually takes about
a couple of hours] [“I have an eye. I couldn’t make
a drawing of you sitting there right now. I would love to have that
ability. In the same way I would love to play the piano. But you can do
anything now, and simply declare it to be art”] [it’s terrible] [his father
a schoolteacher who
joined
The Party, it was necessary and expected if he wanted to keep his job,
who fought in the army was taken prisoner by the Americans,
and then returned home without prospects, like so many others]
By then his son regarded him as a hapless interloper.
I thought, what do you want here.
He wasn’t my father anyway.
He says he doesn’t know who his real father was. He says
she had taken another lover by the end of the war.
Someone says he is the greatest living artist.
Only operating rooms are this immaculate. [here ends the third]

What I have is not facility.
What I have is an eye, yes,
but you have to know when to paint the color chart,
and what to call it.
You have to unmask painting as “dull and nugatory”
[if you are human, pity my distress]
you have to demystify the activity of painting and its pretensions
to creativity,
you have to love beauty, you have to say “I believe in beauty”

(“and then they were very cheap, now they sell for a fortune!”)
(“so maybe they were therefore necessary”)
with a bunch of keys and a lamp before a small iron gate:
“a long unwonted shudder grips,
mankind’s entire grief grips me.
She’s here, behind this wall that drips.
Do you hesitate to go in?
Do you dread to see her again?”
hears the clanking chains and the rustling straw.
[you’ll awaken the guards! speak quietly!]
[Oh sleep the sleep of the end of the fourth of the days]

“I want this to be seen—listen to me—always—as a narrative—
even if it is a narrative of nothingness—nothing is something—you might say, no?—
as you might say these are photographs of nothing”
You can look for instance in Ensslin’s corpse,
at Baader’s bookshelves, the ones in prison,
or the phonograph in which Baader was said to have hidden the gun
with which he killed himself—here: Meins surrendering
to the police—here: two versions of Baader’s corpse—
head, face and floor like adjacent clouds, grayish—
the whole drama [history] floating by over the bodies, yes—
an aggressive weapon, but also a plan of defense?—
the moment in which you give yourself away?—
the stroke of midnight, say—that moment—[it
being all over]—
and you, you who have the means of keeping it,
of not turning to dust, right here in front of me, of not letting it
turn to dust—
[I can’t make you, of course, he says, I can only copy you]
[here in my garden, dreaming of becoming complicated]—[the contract between us
freely drawn up, but
not “free”]—[as you
know]—
[end of the fifth] and yet

all in vain, the things themselves turning to dust—
reducing this world to just this world—
the copier still here, at this dinner table, waiting for the meal to be over—
the words “after all” becoming suddenly important—
“after all, all things are possible in a certain way are they
not?”—the madness of non-discovery cloaking you gently, brightly—
long may it prosper, the dream of transparency—
the “succession of events,” the scene that takes on the “feeling of
distance.” Or my asking “can anybody in here read this page”—
Oh private words, certainty, profit, manners.
I blush with privacy at the pleasures of explanation,
at this looking-away that we’ve come to call knowledge.
Even this crumb, here, full of echo, wanting to mean.
Invented for that purpose—little brilliant phoneme—what is transparency
to your echoing now? The fullness of what is given? The stroking of
[where the sixth day closes]

fortune? of fancy? of self-invention? All this and morning still before us—
the snowy scene, the side of the building—its staying, a kind of raging, a burning of
design—
of intentions—house invented for you to hide in—have you now grown up? moved
away?—a jewel?—projected with all its weather
onto the blank canvas?—and nothing left out—nothing left hidden—
existence: is it in it? is it found hanging in its cell?—
there was to be a meeting, as one of lovers, but then something was
arrested—
just there where the center was beginning to form—
no, there should not be a center—listen how it echoes—
you can blot it nicely with some abstraction—
something applied to the blank—“gaudy and generic”—
“then he employs homemade wood and plexi squeegees”
to scam and drag the paint—[every direction the right one!]—
[“I don’t think you are expressionistic, are you?”]
the process involves repeatedly building up and wiping off—
the effect different depending on the squeegee—on “how pressure
is applied”—he has become very adept but there is still the element of chance—

perhaps you are being kept here, somewhere in this room—
you have hidden a gun? you have hidden whatever means
you might need to get out? is your body here? is your phonograph?
and your books, do they add up, is the peculiar light upon them,
that of your single existence, of what a waste it would be to waste it,
[oh look down now, where are your hands, is it the color chart, is it the tablecloth?],
someone now removing any trace of the coffee cup
there on the table where I had just left it,
transparent guardian of all that is and could be—
Listen, in your cell, your act is the only sentinel
then there’s all this construction—it is fierce yes, it will acquit no one—
distant impulses render the whole surface ultra-sensitive,
all the middle distance, the concerned elaboration—
the year x saw him joined, the year y saw him married—
and the past, the past is also yours to keep if you wish,
with its own last effort to outwit you,
with its silently projected map of the world.

[and on the seventh]:
Where the winter grew white, we went outside.
We went outside to look at things again.
There were little farmhouses, there were too many trees.
But once you have seen a thing, you have to move on.
Whose idea was this—how even when we’re late now we’re perfectly happy.
We just go on happily gathering speed.
Us—like a list of examples that keeps growing faster.
Embracing brutality and importance. Some joy. Some preliminary
sketches.

Note: Some language is used—often in altered form—from Michael Kimmelman’s “The Enigma: An Artist Beyond Isms,” which appeared in The New York Times Magazine (January 27, 2002). Quotations from Goethe’s Faust are from the Walter Kaufmann translation. 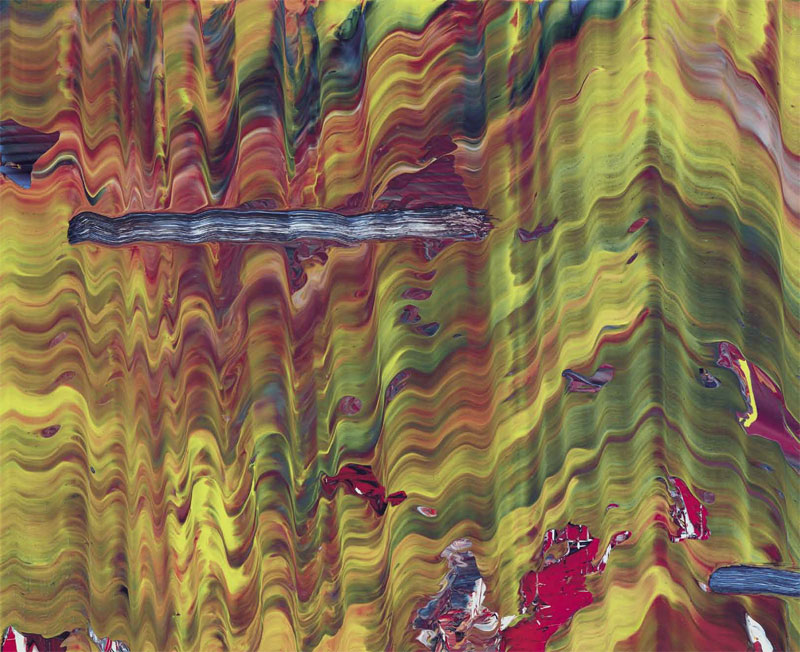