A Chimera in mythology is a composite of a lion, a goat, and a serpent; in biology, a chimera is an organism composed of tissues from at least two genetically distinct parents. We might well regard Gerhard Richter’s abstract paintings since1976 as chimeras—ones constructed simultaneously out of the experience of the painted and the experience of the photographed, part illusion, part relentlessphysicality—not clearly defined or resolved but constantly metamorphosing. In these abstractions, which he calls “pictures” (Bilder), a panoply of referentiality and tonal spatiality, again and again, erupts from and recedes into the materiality of paint. You might spy a fragment of serpent’s tail or lion’s mane suddenly rising to the surface, only to look again to find your eye bobbing in the blur of rippling tides of layered liquidity propelled by the lateral thrust of Richter’s squeegee. Synonyms of chimera include illusion and delusion. Whether illusion or delusion remains moot in the matter of Richter’s painting. What remains certain is the astonishing and challenging variegation of his imagination—and possibly ours—and his ability to give body to and analyze our visual intelligence.

The reciprocity of photography and painting marked Richter’s art from the outset of what he has catalogued as his beginning. After being exposed to only Communist social realism and a smattering of early modernism, the epiphanic experience of seeing Jackson Pollock’s and Lucio Fontana’s paintings at Documenta 2, in 1959, on a visit to the West, catalyzed his flight from East Germany two years later. Settling in Düsseldorf and studying at the Art Academy, he took to painting gestural abstractions and was simultaneously exposed to the more radical acts of the Fluxus artists. In 1962, the year he has marked as his art’s beginning—the same year Andy Warhol and Robert Rauschenberg began to employ silkscreened photographs in their painting—Richter employed photographs clipped from newspapers as the basis of his paintings. Initially he decided on this subject for its non-art stylelessness; and he defaced these photo-based subjects with gestural smears calling to Art Informel, or physical cuts calling to Fontana, or thought balloons.

By 1965, these delinquent incompatibilities of making gave way to photo-based images veiled by lightly stroking a dry brush over the still-wet surface, so that the image appeared like a tenuously blurred reflection. The resultant image, as well as the painting’s surface, became visually impossible to locate. At once, Richter highlighted the artificiality of creating and the fact that we construct our vision
rather than receiving it whole. His engagement with photography also elucidatesthe endless proliferation, in our culture, of the photographed—whether by still, video, or movie camera. Since the second half of the 20th century, the prevalence of photography, with its concomitant conflation of the real and the staged, has come to mediate much of our knowledge of the world. With rare exception it is the photographed, along with evasiveness of surface and configurational incompletion, which hallmarks Richter’s art.

Having already experimented with various modes of abstraction—the found imagery of the Color Charts, the variations on minimalist monochrome work in the Gray Paintings—in 1976 Richter began what would become a major part of his making: the Abstract Pictures. The earliest of these works, sometimes referred to as soft abstractions, buzz with geometric and quasi-geometric fragments adrift in a hazy ether. Sleekly painted in sepias, browns, and dark reds, and vibrating with varying tonalities of suffused light, these works look like they might be renditions of extreme blowups of details of photographs or details of one of Richter’s own paintings; and in some cases they are. In the course of the following year, Richter turned to a more physical painterliness, starting each work with splashes of bright color or a simple geometricized configuration, then employing various squeegees to push wet paint around—layer over layer, erasure after erasure—varying the speed, directionality, and pressure on the squeegee, engaging chance, and finally dragging a fine-haired brush over the wet surface, as he had done and continues to do in the photo-based paintings. The results remarkably combine the agitated, gestural physicality of Abstract Expressionism with the atmospheric tonal and spatial shifts found in photography and much pre-modern figuration. Pictures.
Abstract painting for the age of television. Picturing.

By 1985, the squeegee movements that simulated broad brushstrokes (accompanied by flurries of paint spatters) more and more gave way to a denser complexity and variegation. A suppressed radiance and an astounding crowd of disparate visual incidents, not unlike those more seamlessly activating an Old Master painting, now dazzlingly pulse through the paint. These abstract pictures stretch into Abstract Expressionist alloverness. They look somewhat akin to viewing, say, Hieronymus Bosch’s Garden of Earthly Delights or Last Judgment through a cracked, Pollockian lens. In the late 1970s and early 1980s, various artists, such as Julian Schnabel and Richter’s countryman Georg Baselitz, also employed an Abstract Expressionist–inspired gesturality in their figuration. And, by 1985, Brice Marden was extending and refining modernist abstraction with a looping, slow-motion grace that looked to Pollock as well as to Chinese and Japanese calligraphy. However, only two other artists engaged in a gesturality related in its oxymoronic (chimerical) nature to Richter’s: Roy Lichtenstein, whose use of reproductions had impacted Richter’s initial choice of newspaper photographs as subject, and Andy Warhol.

In 1978, Warhol created two groups of abstract paintings (Oxidation aka Piss paintings and Shadows paintings) that mimed Abstract Expressionist engagement with chance; in his 1988 Rorschach series he looked directly to Pollock’s late blackand- white paintings and transformed the spontaneity of Rorschach blots and Pollock’s partially aleatory gestures into a photo-mechanically derived symmetry. Lichtenstein, starting in the early 1960s, created a mock mechanical, handmade iconic gestural brushstroke that, throughout his career, appears again and again in various guises and combinations, occasionally directly referring to de Kooning.

Although Warhol’s and Lichtenstein’s subversions of late modernist abstraction are quite unabashedly beautiful, they maintain the cool neutrality and some of the irony endemic to Pop and to Richter’s own early paintings. On the other hand, Richter’s Abstract Pictures not only exult in viscous painterly liquidity as did Pollock’s, but they are filled with an often heated referentiality, as are Pollock’s—both intentions at a far remove from Warhol’s and Lichtenstein’s suave sardonics. Coincidentally, Richter’s replacement of the squeegee with a long wooden board to make his very large abstractions calls to Pollock’s use of a similar wood tool for Blue Poles: Number 11, 1952. While Pollock employed a length of wood to indent Blue Poles with rhythm, Richter uses it to blur, smear, erase, and abrade. Richter’s use of boards and squeegees to undermine personal touch certainly relates to Pollock’s flung and dripped, rather than brushed, paint. But Richter’s courting of pictorial space and illusionistic dimensionality, created as a matter of “planned” chance, betrays vastly different intentions than those of Pollock. Likewise, the abrupt and incomplete shapes Richter often excavates from lower layers of paint, and his disparate repetoire of markmaking—which yields impure and intentionally inconsistent results—are almost diametrically opposed to Pollock’s configurational consistency and ruffling, physical frontality.

And so we arrive at the eight small works that have called this book into being, Abstract Picture (858-1) through Abstract Picture (858-8), all created in 1999. Frequently, Richter has painted numbered groups (series would be too programmatic a word) of pictures of like mind and seemingly wanting to tell a story. But individually and as a group they remain open and incomplete—filled with allusions and illusions but no closure. A story about no story. Unlike Pollock, Richter is not driven by metaphysical or spiritual intentions; he is a skeptic not a shaman. He finds solace in nature but no god. He cares deeply about painting and beauty but lives, like most of us, in a shifting world without clear guidelines or overarching order. His making simultaneously reflects his disbelief in a motivating force or purpose and a deep belief in painting.

Each of the first seven of the eight works is painted on the same-sized horizontal aluminum support. This sleek, hard surface receives the application of paint far more readily than does canvas, thus speeding up and heightening the visual slipperiness endemic to most of Richter’s Abstract Pictures. The eighth picture is made on an almost-square, vertical rectangle of conventionally stretched linen; the shape and more porous surface provide a softer, more muted landing for the eye. All eight are painted in one or more variants of red, blue, green and yellow— colors almost automatically redolent of landscape phenomena. The squeegee’s predominantly horizontal thrust pulsing through six of the seven works on aluminum arrives at no conclusive rest at the edges of each support; closure is eschewed. The eighth painting pays more respect to the framing edges of the support and seems to strive for configurational conclusion. But its composure is
flayed by the alternating horizontal and vertical peeling away of its skin.

From a distance, all eight pictures quiver like mirages in shimmering light. Gaseous. Diaphanous. Illusionistic. Seen up close, the paintings congeal in the firm, gleaming viscosity of paint’s liquidity. Surface physicality subverts illusion. In conclusion. Over and over again, in his lengthy interviews, Richter has expressed his skepticism of reality’s comprehensibility and the possibility of creating stable, clearly defined metaphors. The layering of erasure that is his way of creating gives body to this skepticism. A beautiful body dissolving, re-forming, dissolving, changing.

An arcadian rhythm seems to beat under the surface of 858-1 through 858-5: verdant valleys, a chemical sunset that veers into meteor-inflamed night, followed by dawn’s reflection in water, and the mother-of-pearl gleam of daylight blurring a photographic impression of greenery. Something apocalyptic erupts in 858-6: mysteriously irradiated light, violent fissures of the surface made by a knife’s ruthless paring down to the aluminum support, toxic pointed flames of yellow and orange fanning out into blazing red—possibly a metaphorical Last Judgment without judgment (Richter means judge in German). Some calm returns in 858-7: the previous rush of horizontality is replaced by becalmed, almost regular vertical marking; the red no longer inflamed, maybe the red of the heart filled with as much happiness as is attainable; many different cardiograms zigzagging in delicate horizontal counterpoint to the more forceful verticals, eluding verbal measure and intelligence, reveling in visual intelligence. And then it all comes together in 858-8. Pressure from Richter’s tools brings out the nub of the linen surface and creates a sort of slow, pebbled static. The linen is allowed to absorb the colors, colors not strident but almost soothing. The near square of the support and the gathering of marks hovering in the center of the plane aspire to closure, maybe the placid reflection of a face, a resolution after the cataclysmic climax of 858-6 and the conclusion of 858-7.

Or none of the above. The face in 858-8 refuses to congeal into recognizable features; it erodes like a wind-driven cloud. The zigzagging lines in 858-7 may just as easily connote a network of leafless branches as the rhythms of hearts, or may or may not close the loop begun with similar marks in 858’s first painting, our beginning. The story is literally and figuratively an illusion. There is no certain narrative, only a striving in the grip of uncertainty. What is certain is that Richter is our fellow traveler in that uncertainty and that he has imbued our journey with palpitating brilliance. In doing so, he has endowed abstract painting with a singular new life and vitality. 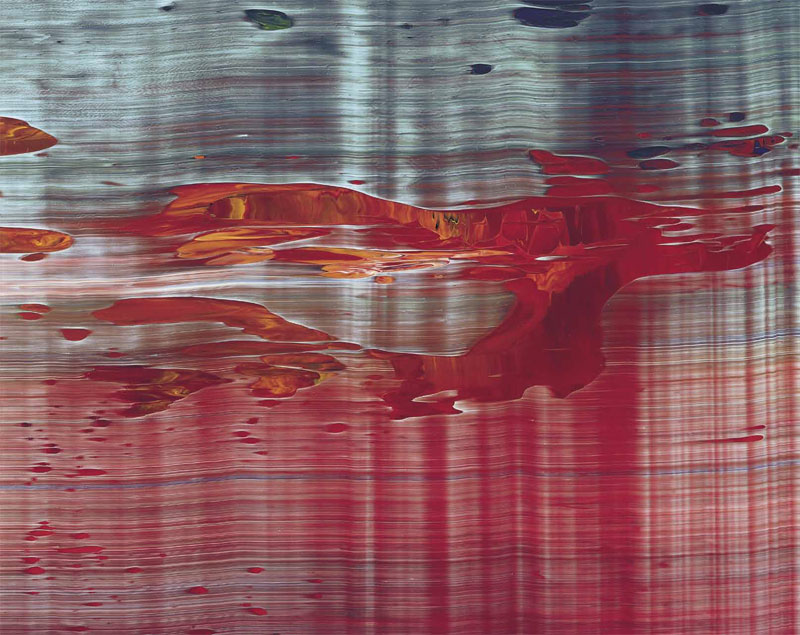 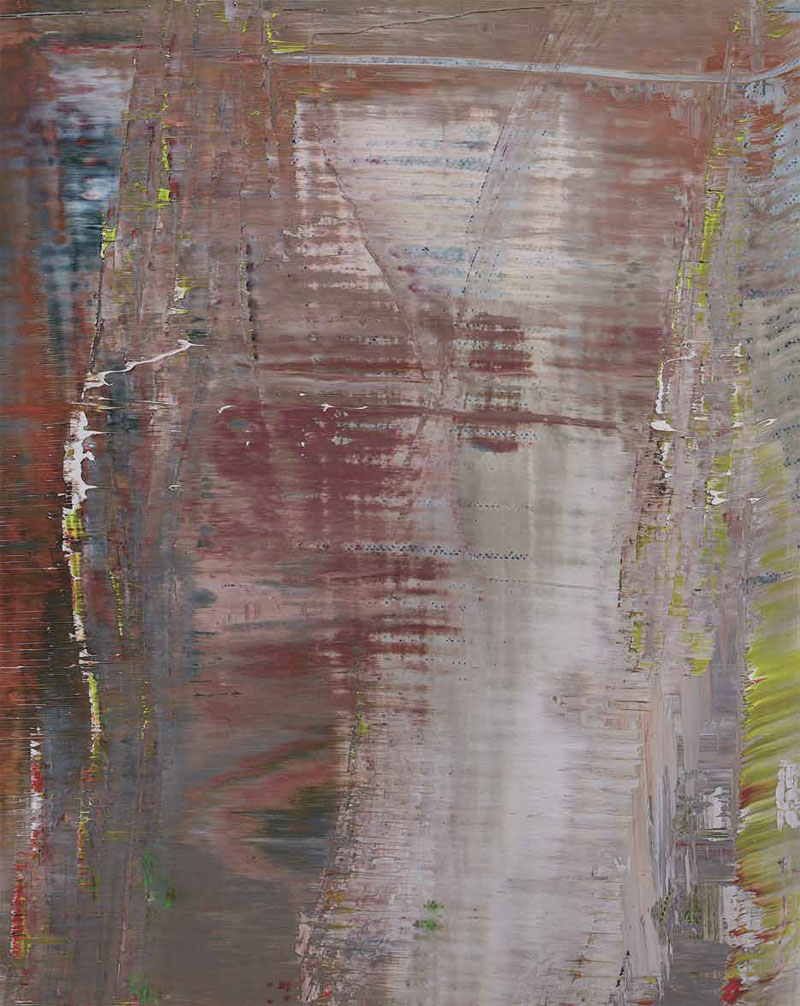